Jonas Schloesing is the director of Riviera, an animated short film about an elderly man observing his neighbors on an oppressively hot day. Below, Schloesing offers insight on the film, his artistic process, and his inspiration.

Riviera is an official selection of Prindie 2020. 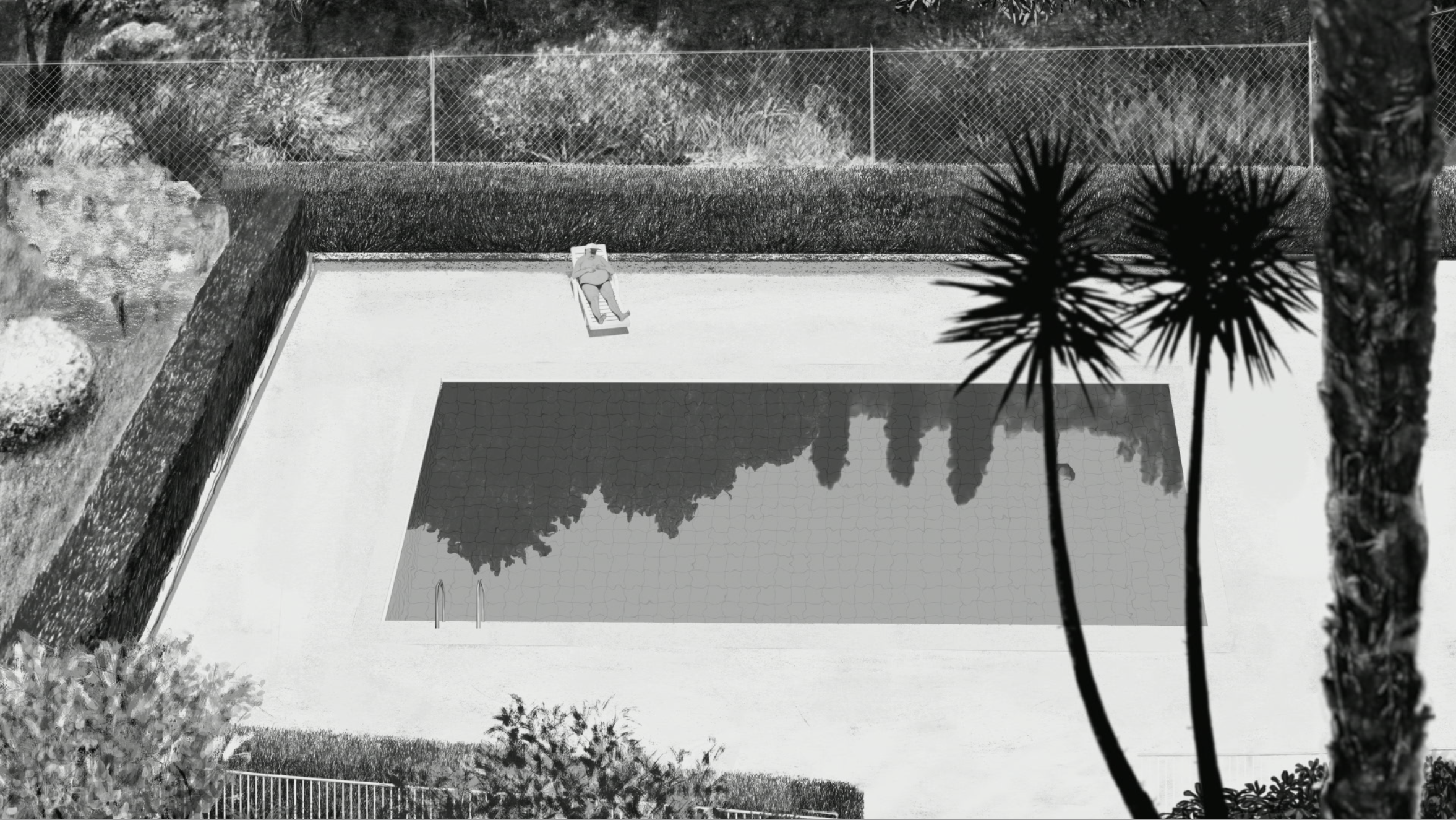 Q: What is your background as an artist/animator?

A: I graduated from the School of Decorative Arts in Paris, where I chose to study animation cinema. I made a graduation film, I Am Nobody - a sort of fragmented portrait of the poet Fernando Pessoa. Riviera is my first "professional" film.

Q: What is it that draws you to animation over live action?

A: Without doubt, my practice of drawing, which I did regularly when I was younger. My interest in cinema also dates from childhood, and it seemed clever to me to combine these two passions. In reality it saved me from choosing and sacrificing one or the other!

Q: What about Riviera in particular inspired you to use animation for this film?

A: I haven't thought about that. In fact, Riviera was initially a short text, a kind of tiny short story, which I quickly thought of transposing into an animated film. Very descriptive, very “atmospheric," I thought that the drawing could well reflect some of the aspects that I wanted to highlight.

Q: I completely forgot what your opening image was, only remembering when I watched a second time! It caught me by surprise. What was the thought process behind selecting this opening image?

A: This first image is linked to a childhood memory. It imposed itself from the start of the writing. I think this first image suggests that within this heavenly and lush setting, death is always present, even if we can quickly forget it ...

Q: Was Riviera inspired by a particular, real-life place or person?

A: Absolutely, the residence shown in the film exists, with only a few different details. As a child, I tried to observe the swimming pool and the building through the trees and the fence that separated it from my grandparents' house. In fact, I transposed certain childhood memories into this reconstituted setting, and I projected into my main character the changing look of my two grandfathers.

Q: Was Riviera drawn by hand or did you rely more on computer animation? (Please also share how long the animation process took and how many people were involved).

A: The film is completely hand-drawn. The sets are made on paper and the characters are animated on a computer, but still drawn by hand ! The digital effects are as discreet as possible and rather rare (at only two times, I think). In addition to myself, I had an animator as a teammate for almost the entire duration of the shooting, which was about a year and a half. In addition, several trainees have followed one another to lend us a hand. But it was overall a fairly small team.

Q: I love the soundscape of this film, as well. What was the process of capturing it, and the thought process behind not using music?

A: Sound is of course very important here. It is about making people feel the almost overwhelming presence of nature, and the oppressive heat during the hours of nap. I also wanted us to feel this wild and invasive setting, even when it is not on screen. A way of suggesting a nature that one cannot escape, and a very noisy “silence," a deceptive calm. In the same way that the black and white of the drawing reinforces the register of dryness, the absence of music reinforces the realism of the sensations, and the impression of real time, even if it is a strange, dilated temporality.

Q: This is an interesting story about a somewhat forgotten segment of the population. What was the thought process behind selecting your main character, and what do you want people to take away from his story?

A: As I said, the main character is inspired by my two grandfathers. I understood very late what was for me the driving force of the film, the deep reason that had pushed me to make it: I think I needed to question the way I looked at these two men from my family, relatives I couldn’t claim to really know. More generally, I believe that the idea is that we never know anyone in their entirety, that there are always facets, aspects of their life that escape us. And that you have to accept that, despite the curiosity or the frustration that it may arouse. Then, of course, the film is pretty cruel as to the fate of my protagonist. It evokes loneliness, boredom, memory, and oblivion. But I hope that we also feel that we have approached him, that we have, a little, got to know each other. And that many things remain to be discovered, or to be imagined.

Q: This film is loaded with powerful imagery. Do you have a particular favorite image? If so, what makes it your favorite?

A: Mmh, hard to say ... Perhaps the image of the balcony, and the bay window where the vegetation is reflected. I have a weakness for reflections and other duplications, and I think this image, when I got the result I hoped for, gave me confidence, and convinced me that the film could "exist" for good.

Be sure to catch Riviera during the 2020 Prindie Film Festival! The festival will be taking place virtually from September 10 - 13! https://watch.eventive.org/prindie2020